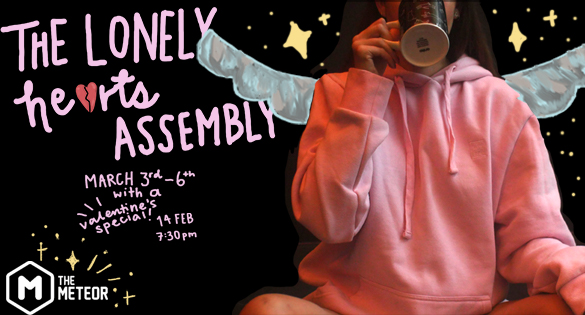 “I think I’d be speaking for a large portion of the population if I said, ‘a day celebrating love, and couples, and uh… touching… what about the rest of us?’

Valentine’s Day is a week away, and Student Union president Aurora Bareilles has invented an algorithm that claims to match people together with their ideal partners. All she needs to make it work are test subjects. Enter the Lonely Hearts Assembly – a group of eight students with diverse romantic histories who all have one thing in common: a deep and untamed loneliness.

The play follows this ensemble as Aurora’s algorithm makes and breaks relationships, builds friendships, and brings sexualities and beliefs into question in the lead-up to a counter-Valentine’s party that could change the face of dating forever.

Written and directed by local playwright Conor Maxwell, this romantic comedy examines the very concept of love, and the ways in which it can be expressed, both in and out of relationships.

The play is 90 minutes, including a 10 minute interval.