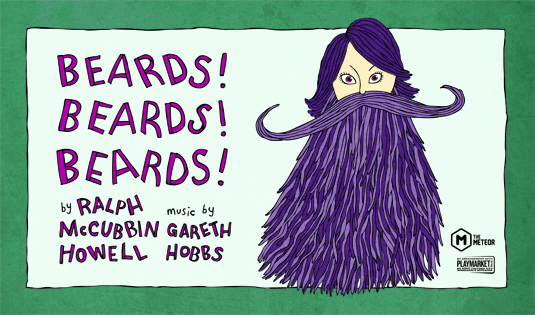 “Attend the twisted tale we bring,
If you will lend your ears,
About a girl who dared to dream
That she should have a beard…”

Beards! Beards! Beards! tells the tale of one young girl’s increasingly inventive efforts to grow the world’s most magnificent beard. Armed with bubble bath and canned spaghetti, join a madcap and hilarious musical romp as our plucky young heroine shakes up social rules and attempts to answer the questions that have puzzled mankind since the dawn of the beard…

Winner of Best Theatre at the Dunedin Fringe Festival and with rave reviews, Beards! Beards! Beards! was written by Ralph McCubbin Howell and originally performed by Trick of the Light Theatre.  The Meteor is proud to present their own version of this hilarious and original piece of theatre for the July School Holidays, directed by Meteor Kids Show veteran Jono Freebairn and featuring local performers Hannah Doherty, Benny Marama and Jermaine Clover.

A must-see for bearded and non-bearded beings alike, the show is suitable for kids 5-13, and for those who are still kids at heart.